Welcome Adventurers!
Here, you can explore the worlds of magic and wonder
by C. H. Knyght 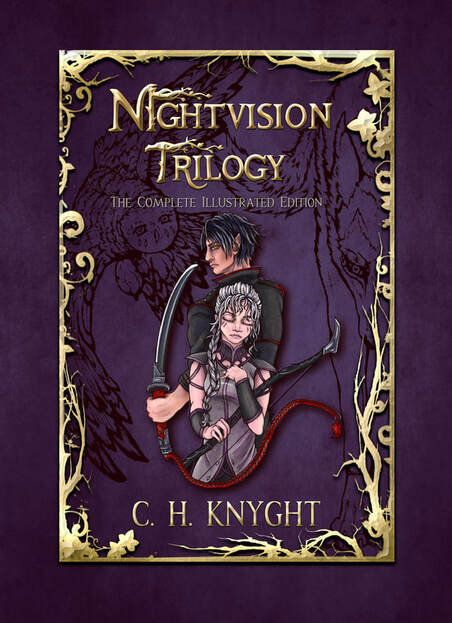 A powerless prince. A deadly blight. A princess with untamed power.
Now isn’t the time for love or fear. Their world is dying.
Dante is prince of the wolf shifters. Unprepared for his crown, he fights desperately to save his people and prove himself worthy. When Princess Nakai falls into his life, spinning tales of dark magic and mad royals, Dante can’t ignore the truth: war approaches. The forge of battle is not how he wanted to try his mettle.
Using forbidden magic, Prince Kobrona corrupts the heart of their world to unleash a worldeater, a being of ravenous hunger. If Dante fails to stop him, their world, his home, will be consumed. Kobrona has magic and an enslaved army at his command. Time is running out.
Dante cannot win alone and the hour of Communion draws near.

Fully illustrated and includes a short story of Dante’s ascension to the throne.
Get this amazing hard cover edition now! 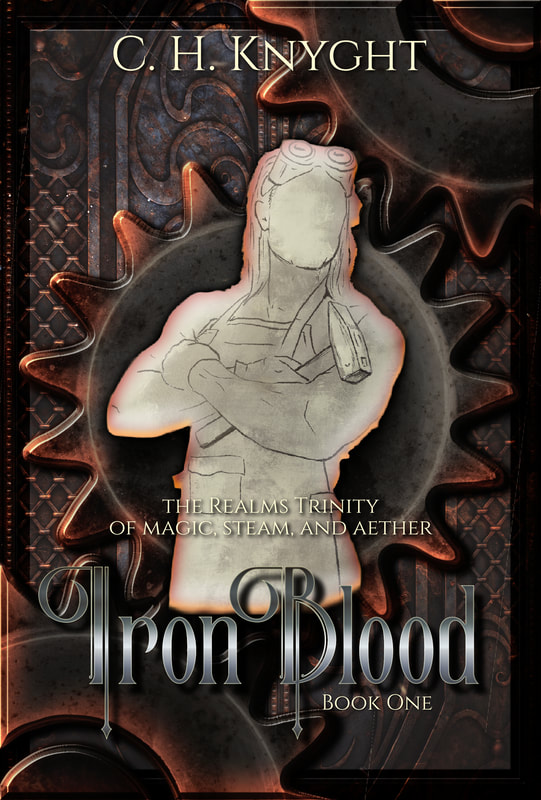 Magic and iron don’t mix.
The balance is tentative, but in an era of peace comes progress.

Progress, success, is what Hezekiel strives for. Human through and through, his magic is that
of heated steel, the solid strike of his hammer, the rumble of a new engine. Hezekiel aims to
claim first prize at the expo with his revolutionary machine, the Crawler, and build a forge and a
name for himself; a name worthy of renown, and courting Ms. Baba.

But, an insidious darkness creeps through the night, leaving death in its wake.
When his neighbor dies, Hezekiel gets snared in the mystery as he tries desperately to protect his family, even from themselves, and find the source of the strange deaths before the city is crippled.

Nightvision: Twilight Shadows
A troubled shifter prince. A deadly blight.
​A battle of royalty.
Dante wasn’t prepared to be king of the wolf shifters, not so soon. He prefers to stay in his wolf form and avoid the doubting glares of his council, especially when it comes to the daily affairs of his kingdom. When Princess Nakai, an owl shifter, falls into his life, spinning tales of forbidden magic and mad royals, Dante can’t ignore the truth: War approaches at Kobrona’s hand.
But assassins and elementals are easy opponents compared to the dramatics of his packmates, and Dante has more than the spreading blight to worry about. Can they put aside their differences to save the world? Or will they tear one another apart first?

Twilight Shadows is the debut work of C.H. Knyght, a fantastic coming of age tale of intrigue, redemption, and action. If you are a fan of Patricia Briggs and Tanya Huff, you’ll LOVE Twilight Shadows! BUY NOW to get swept away in this amazing adventure.

Free: Nightvision Chapter 1
Buy it Signed!
Review of Twilight Shadows: "Nightvision is a deeply engaging novel that sits squarely between traditional fantasy and YA. Not only does Knyght create an epic world of various animal shifting kingdoms ruled over by the all-seeing Mother, but she also blends a break neck storytelling common to YA into a seamless blend. " 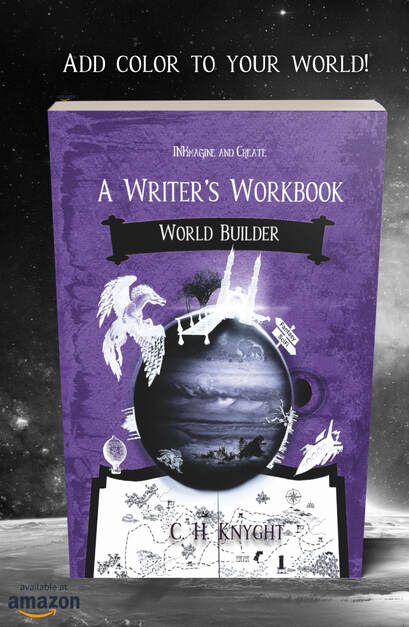 How do you know the answer when you can't remember the question?
With over a hundred and twenty pages, the World Builder has all the deep questions at hand. Every new world needs concrete details to anchor the magic into and allow for the suspension of disbelief. From world type to magic and tech to the people track all the foundational information that makes your world amazing.

For Plotters and Pansters alike, from world type to magic to the people fill in all the sinkholes that could collapse your plot and bury your characters.
The World Builder: A Workbook for Writers is packed with multiple lists describing biome types, resources, creatures, government, justice, history, timeline, art, communications, technologic levels, magic system, transport, relgion, aesthetics, custums, food, room for a dictionary and beastiary, and more! If you write fantasy or scifi, is it a must for your desk. Pairing with the Character Development Workbooks, it also makes a great gift to support your favorite author. Fingers at the ready...and go create Get it now!
​“Watchbird”
She went in alone and too far…
On the hunt for mechanical treasures in the Bloodfields, Clarette is sighted by Smelters, scavengers that use and sell everything, or anyone. The daughter of nobility, Clarette is a prize worth capturing.
Goodreads

This website uses marketing and tracking technologies. Opting out of this will opt you out of all cookies, except for those needed to run the website. Note that some products may not work as well without tracking cookies.